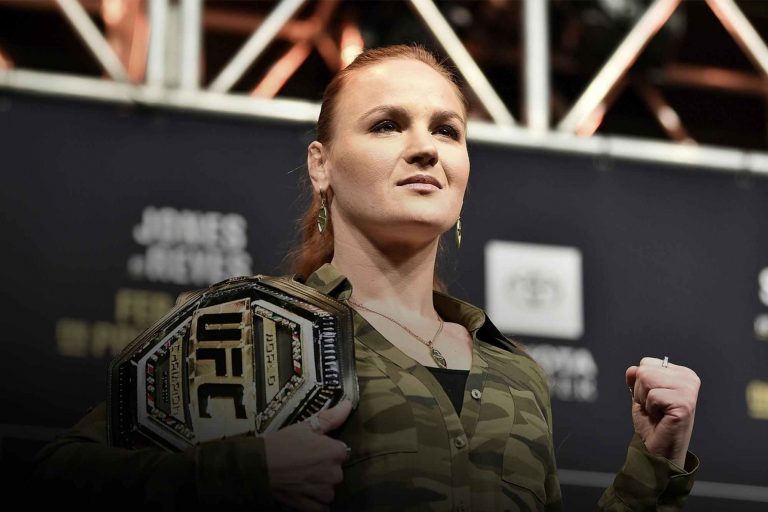 Valentina Shevchenko knows nothing is guaranteed in the sport of MMA.

That’s why the UFC’s reigning flyweight champion, who originally expected to return in August, opted to take off some extra time following leg surgery to allow her body to heal completely before rushing back to defend her title.

“I was hoping that the recovery itself was going to take less than it is right now but it took a little bit longer,” Shevchenko told MMA Fighting. “Everything’s fine. Everything is as it should be with the time of the recovery. It was my first surgery. I didn’t know how I was going to react. But everything is fine.

“I prefer to take one or two extra months for the recovery rather than go in and risk everything that I have.”

Initially, Joanne Calderwood had been expected to face Shevchenko in June but the fight was ultimately scrapped after the 125-pound champion needed surgery. Once it was revealed that Shevchenko wouldn’t be able to fight until the latter part of the year, Calderwood opted to accept a short-notice opportunity to face Jennifer Maia in August.

Unfortunately for Calderwood, she suffered a first-round submission loss to Maia, which in turn cost her the chance to fight for UFC gold. Now Maia will receive that title shot instead but as much as it seems like Calderwood gambled and lost, Shevchenko doesn’t exactly see it that way.

“It’s hard to understand someone’s decision. You never know,” Shevchenko said about Calderwood taking a fight rather than sitting and waiting for a title shot. “Probably she was like she needed this fight, she needed to be active. No one can judge her for this because this is what I feel for myself. I need to be active. I want to fight.

When the fight with Maia came together, Calderwood was still favored to win but she got caught in a submission in the opening round and suffered a loss instead.

While the risk outweighed the reward in the end, Shevchenko says that’s just part of the sport and no one should be pointing the finger at Calderwood for taking the fight in the first place.

“This is MMA. This is mixed martial arts. You never know what’s going to happen,” Shevchenko said. “Jennifer, she was preparing for the fight like it was her last fight in her whole life. You could see it in her eyes. She was hungry for the victory. Jojo, I don’t know, my opinion, she was kind of like not there probably.

“Sometimes it happens with fighters. It doesn’t matter how you are preparing, how good you had a training camp, sometimes this happens. I don’t know if it’s psychology or something else but it happens. But things changed.”

Rather than face Calderwood as originally expected, Shevchenko is now preparing for a November date against Maia, who was granted the title shot with her victory.

There’s always a chance that Shevchenko will encounter Calderwood in the future but for now her full focus has turned to Maia and defending her title for the fourth consecutive time.

“Now I have another opponent for my fight, Jennifer Maia, and I’m good with that,” Shevchenko said. “For me, it doesn’t really matter who is going to be in front of me.

“I’m going to be prepared the best way I can. But what I want, my opponent is going to be a good one, the best one and they fight with the best version of themselves.”