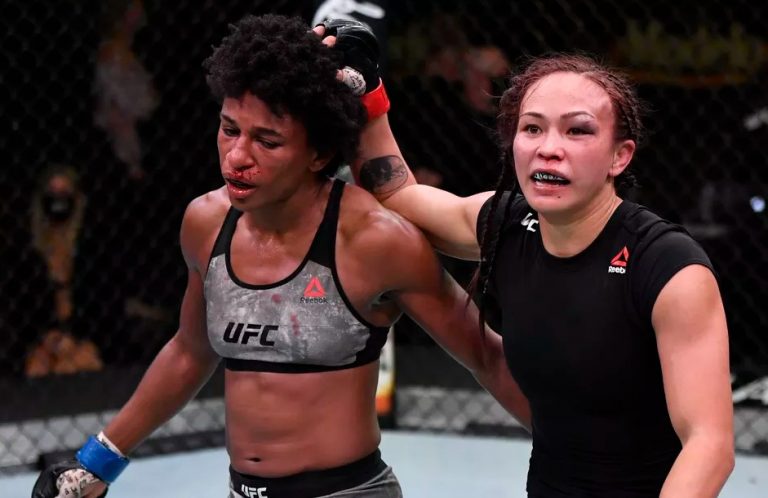 UFC Vegas 10 is officially in the books and was just closed out with the UFC’s #8 rated strawweight, Michelle Waterson, and the #13 ranked, Angela Hill, waging war for 25-minutes. The bulk of this fight occurred on its feet, with both fighters scoring ample strikes throughout. There was a small segment that took place with Waterson on top, but Hill did a great job of stuffing the takedown. When the smoke cleared it was Waterson who swayed two of the three judges to walk away with the split decision.

Hill dressed forward early, forcing Waterson to back up and pump her jab. Waterson tried to clinch up but opted to back out of it. Hill was scoring with clean punches that kept Waterson uncomfortable. In the clinch, Hill was able to control and land some knees to the body. It was a rough start for Waterson to say the least.

Waterson was having a lot more success countering early in the second round. She was able to score with some volume from range. Hill came back and cracked Michelle with a hard counter shot that got her attention. She scored with a couple more punches to the face before Waterson was able to clinch up. Waterson had a another surge in offense towards the end of the round, but it might not have been enough to steal it.

Hill pressured in the beginning of the second round and the fighters went back and forth yet again with strikes. Just when Hill started to gain some momentum, Waterson hit a trip takedown. She locked down the top of half guard and controlled Hill while sprinkling a couple of strikes here and there. Hill tried to scramble out but Waterson made the proper adjustments to maintain control. Hill landed an illegal up kick just before the bell, resulting in a warning from the referee in between rounds.

Waterson tried for an early takedown in the fourth frame, but Hill was able to fight it off and remain standing. The combinations of Waterson started to flow as she looked for ways to close the distance. Hill was denying those entries, but the setup strikes of Waterson were getting through. Hill did a great job of fighting hard to not get taken down.

Waterson again tried to get herself a takedown start the final round, but agains Hill refused to give it to her. They were left to strike it out in the middle of the Octagon. Waterson was leading with a mixture of punches and side kicks, while Hill was looking to counter punch. Neither woman was really able to take over as it came down to the wire. Waterson started to flurry, and then Hill responded with a flurry of her own as time expired. What a fight!