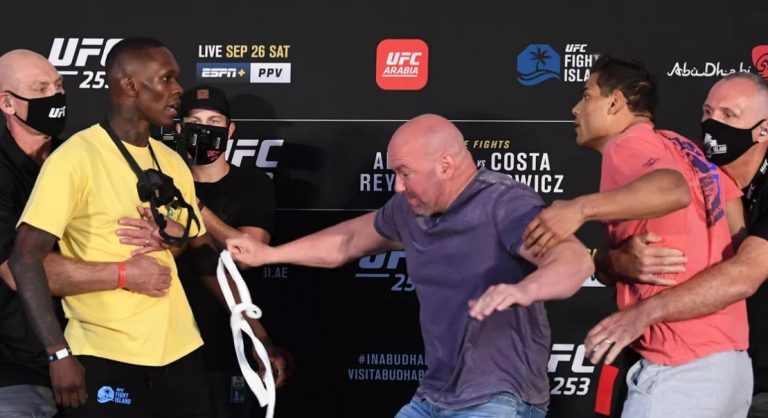 After months of back-and-forth trash talk, Israel Adesanya and Paulo Costa had one more heated exchange ahead of their main event clash this Saturday.

Adesanya defends his middleweight title against Costa in the UFC 253 headliner in Abu Dhabi and the two squared off after Friday’s weigh-ins, which can be watched above.

Seemingly mocking Adesanya’s grappling skills, Costa pulled out a white belt and tossed it at Adesanya, prompting Adesanya to toss it right back. That gesture kicked off a brief scuffle that was quickly broken up before the fighters could reach each other.

At a press conference Thursday, Costa scoffed when Adesanya suggested he could submit Costa, a jiu-jitsu black belt.

“I’ll berimbolo you if I wanted to,” Adesanya said. “I’ll grab your f*cking collar right now and put you in a bow-and-arrow.”

“You never put a gi on your skinny body,” Costa replied. “Talk about jiu-jitsu with me. You’re crazy.”

Adesanya and Costa are both more well-known for their elite striking skills, but they’ll have 25 minutes on Saturday to show everything they have to offer and settle their grudge.