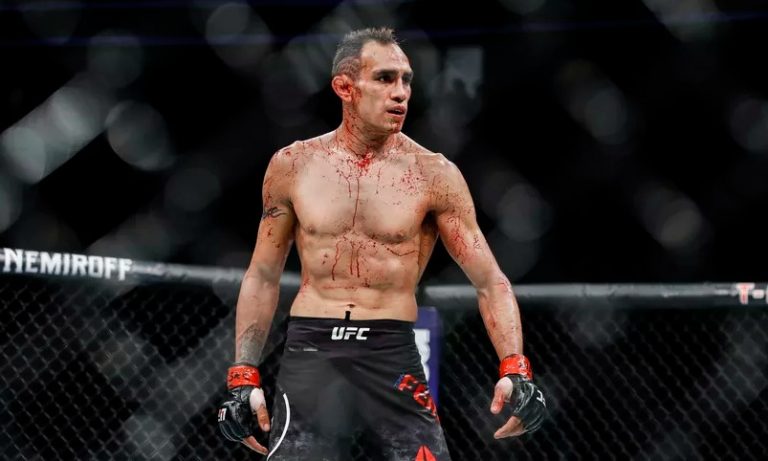 Former UFC interim champion Tony Ferguson would ideally like to fight undisputed champion Khabib Nurmagomedov. But if that isn’t happening – and with Nurmagomedov booked at UFC 254, the event Ferguson was supposed to co-headline, it won’t – then give him another opponent.

And bring the checkbook.

“I hear that they’re needing a main event,” Ferguson said on Wednesday during “The Ariel Helwani Show.” “There’s one in November and one in December. My agent said we’re fine to fight, but we want to discuss pay because of the opponent change. I always told the UFC I’m in. I’m good with the fights, so let’s make it happen.”

UFC President Dana White said Ferguson “went dark” on the promotion during negotiations for a potential fight on the Oct. 24 pay-per-view card. Ferguson said he was offered a bout “so last minute” against former Bellator lightweight champ Michael Chandler and didn’t respond to White because he was busy.

“I don’t do Joe Rogan podcast, and I don’t pick up Dana’s phone calls,” he said. “Because I’m too busy working, or trying to make my life better from the sh*t that I had to go through. So pardon me, f*ck everybody else.”

Chandler is now on deck at UFC 254 as a backup fighter in case Nurmagomedov or Justin Gaethje, who defeated Ferguson at UFC 249 to set up a title unifier, are unable to compete.

Before Chandler’s signing, Ferguson was supposed to face fellow ex-interim champ Dustin Poirier in the Oct. 24 card’s co-headliner. Poirier subsequently fell off the card over contract negotiations with the UFC and is now angling for a charity boxing match with Conor McGregor; White has said he’s offered the former opponents a fight and hasn’t heard back.

Ferguson said the UFC initially informed him he was fighting Poirier, but then offered a more lucrative offer to Chandler.

“Now you’re going to bring in a new dude who I have no clue who this dude is,” he said. “From a marketing standpoint, dude has less than 100k on Twitter. You’re going to try him more notoriety by throwing him against me and throwing him on the Khabib card. I get it. But don’t pay him more than us. He has zero time in the UFC.”

Ferguson scoffed at the round robin of opponents, yet said he had no problems fighting any opponent.

“Everybody wants me to fight Khabib, right?” Ferguson said. “Yeah, But I’ve got to earn my right back. OK, cool. Who’s it going to be? It is going to be Dustin? Or is it going to be Chandler? I don’t give a f*ck.

“I said it was a tournament. Now you’re adding in people. Alright, cool. Here we go again. Today marks the celebration, right? Yeah, Khabib and McGregor. F*ck them. That wouldn’t have happened unless they stripped my belt. So, f*ck you. Pay me instead of this (expletive) clown.”

In the meantime, Ferguson said he’s building a business as a gym owner and a team leader. He’s ready to fight any opponent and just needs the right offer. He floated the idea of wrestling Olympic champ Jordan Burroughs in Chael Sonnen’s Submission Underground.

Where things went south, Ferguson said, was when White started to speak for him on his plans for Poirier.

“Bro, we’re not friends,” he said. “I never said we were friends. It’s just business, right? I’m there when you need me, and obviously when you don’t. I’m a contractor man, but I’m not just a piece of meat. It’s not just about knowing your value. I’m ready to step up to the plate.”

And when he does, he plans to avenge his losses and win the undisputed belt.

“Justin Gaethje, you’re [expletive] welcome you have a belt, son,” he said. “I guarantee, I’m going to tell you to go get my belt, because your ass is going to get whipped, and I’m coming for it. So both you and ‘fathead’ [Nurmagomedov], this is a message for both knuckleheads: my mat, my time.”