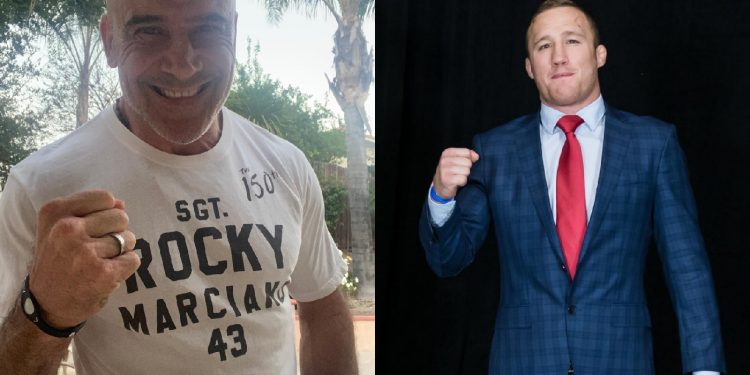 UFC legend Bas Rutten thinks Khabib Nurmagomedov could be in for the fight of his life against Justin Gaethje at UFC 254.

The former multiple-promotion MMA champion thinks Gaethje has the stamina, wrestling and, perhaps most importantly, tenacity to push Nurmagomedov to his limits and break the undefeated Dagestani in the octagon on October 24.

“I think [Gaethje] could be the guy who beats [Khabib],” Rutten told Submission Radio in a recent interview. “I truly believe so, because he’s a great wrestler – he might stop the takedowns. Listen, the best thing that ever happened to Gaethje was getting knocked out, because I had been telling him at the World Series of Fighting and PFL so many times, ‘Why do you fight like this?’ [He said], ‘Because it’s exciting and I want to be here for the fans.’ And I said, ‘Dude, eventually it’s going to hurt you. You want to be able to speak to your kids when you’re going to have kids, right?’

“When he got knocked out, now, suddenly, he starts fighting like his coach Trevor Wittman really wants. The way he was with [Tony] Ferguson, that was scary. I was afraid for Ferguson. He started shaking his head, I thought, oh, he’s got brain damage. He got hit so hard, and nobody’s been able to stop him. I know Gaethje is in Denver and he’s got the mile-high [environment], and they’ve got great stamina. I thought Ferguson could keep on pushing, but [Gaethje] had no problem.”

“So now, Khabib is going to face someone with endless stamina, a freakin’ heart as big as a lion. Even if he’s tired, he will do the craziest things. He’s got great low kicks, he’s got great takedown defense, and who knows, man? He’s really started thinking later in his career, and that’s why you see him shine now. Maybe he’s going to shoot for a takedown. You don’t know what he’s going to do, because he’s never done it before.”

Gaethje has arguably the most vicious leg kicks in the game, having won several fights via leg kick TKO, and Rutten thinks the former WSOF lightweight champ would be wise to chop Khabib down in the later rounds rather than risk exposing himself to takedowns in the earlier rounds.

“I think that if Gaethje can do that as well with his low kicks; I wouldn’t do that in the beginning especially, because that might set him up to be taken down,” Rutten said. “But now we’re going to find out if we can stop the takedowns from Khabib, and if he can Khabib is in trouble.

“I think if Gathje is pushing, pushing, pushing, and once [Khabib] gets tired, and that’s the moment you want to start implementing the low kicks. Like in rounds three or four, once they start getting tired, because Khabib – I think nobody has ever fought a guy like Gaethje. This guy just comes forward the whole time and everything is power, and he’s got endless stamina. He’s a very hard guy to fight.”