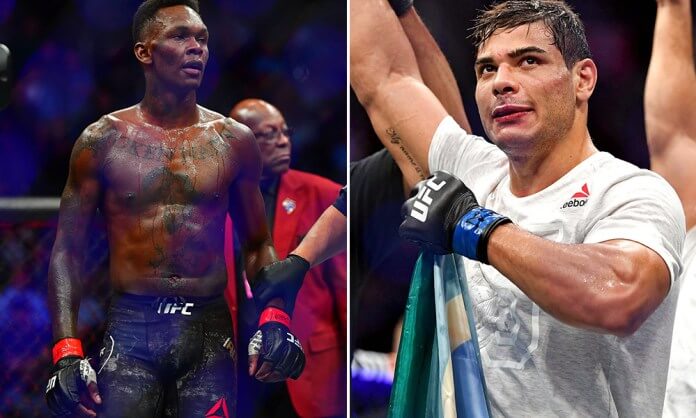 Paulo Costa and Israel Adesanya have reached a new level in their rivalry, but the middleweight contender says Adesanya’s expectation about a possible fight week gang vs. gang clash is unrealistic.

Costa and Adesanya will collide for the middleweight championship in the main event of UFC 253 on Sept. 26, the second time in UFC history that two undefeated fighters meet for an undisputed belt.

“Borrachinha” says his hate towards Adesanya “is real” and he has never felt anything similar regarding an opponent before in his life. And with that, the Brazilian believes he has gotten inside Adesanya’s head.

“He’s acting like someone that’s been bothered, someone that’s uncomfortable,” Costa said in an interview. “The worst thing that can happen to a fighter, especially one that has the belt, is to get uncomfortable. His actions, the way he thinks, he even said… He got to the point of asking me not to do any trolling or anything stupid thing with my gang during fight week.”

In a recent interview with Submission Radio, Adesanya said he anticipated some kind of altercation with Costa and his team in the days leading up to UFC 253, saying he will “have my whole crew with me.”

“You don’t understand,” Adesanya said. “I’ve got the gang with me. So, if he wants to try something stupid with white glasses and f*cking ‘Cringe King’ whoever, bring it. My gang versus your gang. But I’d rather whoop his ass in the cage. So, he better not try something stupid.”

Costa laughed at those comments.

“The so-called gang he’s referring to is me, Eric Albarracin and (Henry) Cejudo,” Costa said. “That shows how he is. It’s a huge joke. He’s afraid of Albarracin, Cejudo and I doing something to him, he said he was prepared with his gang, too. First of all, there’s no such thing as a gang. And second, if I had to have any gang I wouldn’t do it with Albarracin and Cejudo, who are 5-foot-4.”

All that hate and anger might change the way both fighters perform inside the octagon on Sept. 26, and Costa believes he “has to have a balance, otherwise it can affect you. It can affect you in many different forms, you might end up over-training or getting injured or even hurting people, get angry, so it has to be a balance.”

At the end of the day, Borrachinha foresees the “The Last Stylebender” trying to avoid a real fist fight in the eight-sided cage.

“Anything can happen. Anything can happen, but he tends to… Someone who has fear, someone who has afraid, tends to gets even more scared,” Costa said. “Like he did against (Yoel) Romero, just waiting there, letting time to go by. I don’t know. But the reality is, I don’t care. You’re talking a lot about Adesanya, but the truth is I don’t care. I don’t care what he’s going to do, I don’t care what he’s going to think. That doesn’t matter. The only thing that matters is me and my training. What really matters for me to win is myself being well, you know?

“Thinking about your opponent is a loser’s mentality, that’s something people do when they lack confidence and have issues with themselves. I don’t worry about him. I don’t care how he comes, I just worry about myself. I always focus on my training. When I’m in my best, no one can stop me. It doesn’t matter what he does. He’s showing signs that he’s uncomfortable, let’s put it this way so I don’t use bad words here, but I don’t care. I’m focused on myself. I have a champion’s mindset and that’s going to happen soon.”

Adesanya brings a perfect 19-0 record to the cage with wins over the likes of Romero, Robert Whittaker, Kelvin Gastelum, Anderson Silva and Derek Brunson, while Costa scored five of his 13 professional victories under the UFC banner, including “Soldier of God” Romero, Uriah Hall and Johny Hendricks.

Borrachinha sees himself “knocking [Adesanya] out or submitting him” to conquer the middleweight title, and guarantees he won’t be frustrated if he sees Adesanya “running” backwards inside the octagon because “I already expect that to happen.”

Costa disagrees when someone labels this match as a clash of technique and power, though.

“I’m more technical than him,” he said. “I have more qualities than him, but people think whatever they want, right? People follow what the media says. People sometimes get influenced by what journalists says, and they really don’t know what they are talking about and that end up creating a wrong narrative, but what happens in the fight is what matters the most and that’s when people will know who’s who.

“I’d say it’s a fight between someone who’s scared to fight, a runner, against a real man, someone who goes for the fight and for the knockout instead of run around trying to win by points, avoiding the fight. I’m the one that goes for a fight, who makes the fight happen.”