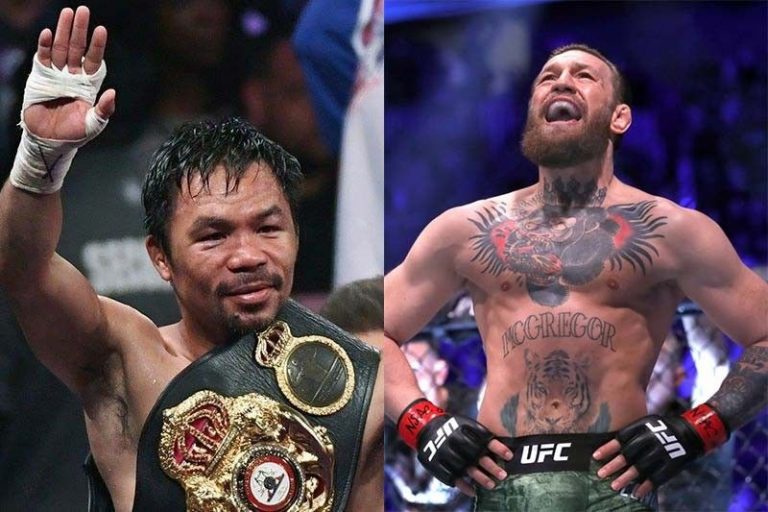 A fight between Manny Pacquiao and Conor McGregor is closer to becoming a reality.

Earlier this week, McGregor tweeted out that his next fight would be against Pacquiao in the Middle East. The news certainly captured the attention of combat sports fans and pundits alike as a fight between Pacquiao and McGregor has been teased in the past, but nothing ever came to fruition.

This time, however, it is far more likely now that both sides have confirmed that a fight is planned to take place in 2021.

Audie Attar, the manager of both Pacquiao and McGregor, told ESPN on Friday that the fight was not a “done deal” just yet, but it is being seriously discussed at this time. The following day, the assistant to Pacquiao, Jayke Joson, confirmed the fight in a statement released on Saturday.

“For the sake of all the Filipino Covid-19 victims, Senator Manny Pacquiao will be fighting UFC superstar Conor McGregor next year,” said Joson. “The huge portion of his earnings will proceed to those who are affected nationwide by the pandemic.”

This is not the first foray into boxing for McGregor. He boxed Floyd Mayweather in 2017 and was stopped by way of technical knockout in the tenth round, putting his professional boxing record at 0-1. McGregor returned to the UFC a year later and fought for the lightweight championship against current champion, Khabib Nurmagomedov, who submitted McGregor with a neck crank in the fourth round.

McGregor returned to the win column earlier this year with 40-second knockout of Donald Cerrone at UFC 246. He has not competed since then, and has previously mentioned that he would be retiring for mixed martial arts for the third time.

Pacquiao, who is currently a serving senator in the Philippines, last fought in 2019 when he earned the WBA Super Welterweight Title after defeating Keith Thurman by split decision.