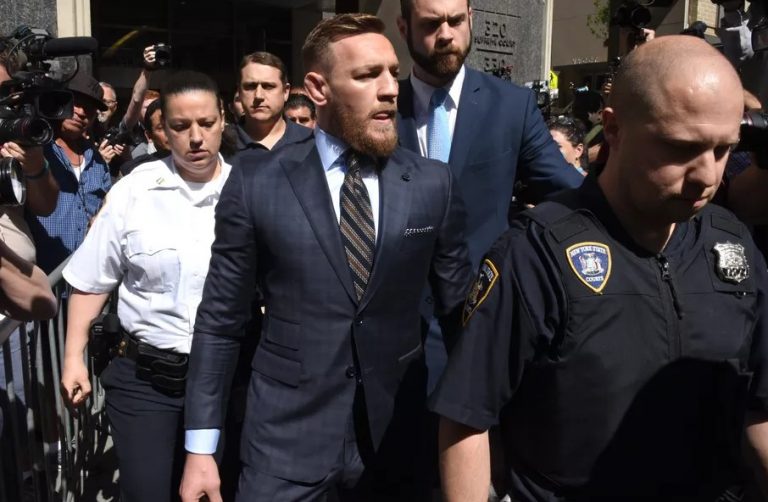 Yahoo Sports Australia has reported new details regarding Conor McGregor’s recent encounter with police in Corsica, France. The former UFC lightweight and featherweight champion was reportedly taken into custody by police on suspicion of attempted sexual assault and indecent exposure.

McGregor’s representatives have “vigorously denied any accusation of bad behaviour” on the part of their client.

McGregor was shortly freed from custody and was not charged with any crime.

According to Yahoo TV broadcaster France 3 Corse interviewed a friend of the alleged victim in this case.

That source told the station, “McGregor, accompanied by his bodyguards, allegedly exhibited his private parts to the young woman without her consent as she made her way into the bar toilets.”

That source also said the young woman was “deeply shocked” and that she was holidaying on the French island with her husband.

A formal allegation against McGregor was made last Thursday. In response to that allegation McGregor’s yacht was searched by police. McGregor and his family have been docked in Corsica ahead of a 180 km charity water bike race McGregor planned to take part in.

Conor McGregor being handed a summons by the French police over sexual allegations and indecent exposure for allegedly exposing himself to young married women after a heavy drinking session on the french Island of corsica (images via Goff Photos) #mma #mmanews #conormcgregor pic.twitter.com/jIayl0Wws1

Earlier this year McGregor announced that he had retired from the sport of MMA. He has made this claim multiple times in the past.

The last time McGregor fought was in January, when he defeated Donald Cerrone. Prior to that fight McGregor took a two year hiatus from the sport—after being defeated by Khabib Nurmagomedov at UFC 229.

During that hiatus The New York Times reported that McGregor was a suspect in two separate sexual assault accusations. In 2019 McGregor was also arrested after an incident with a fan in Miami, which resulted in charges of robbery and criminal mischief. Those charges were dropped after McGregor and the fan reached a settlement agreement.

Also in 2019 McGregor was convicted of assault after he struck a senior inside The Marble Arch Pub in Dublin.