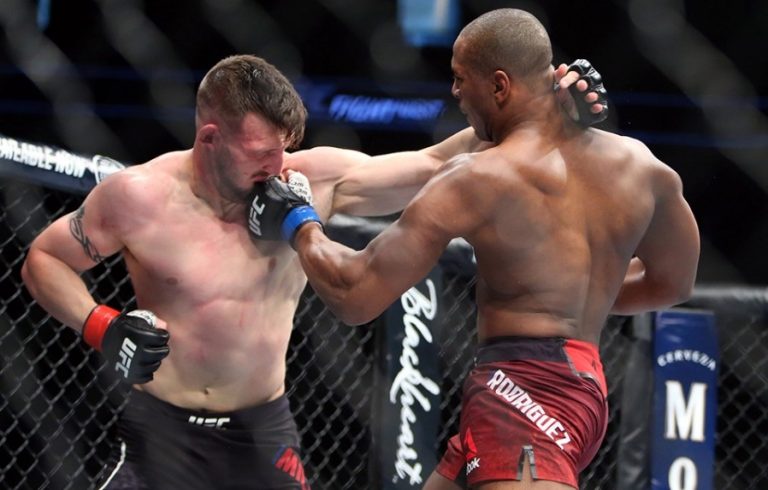 UFC middleweight Mike Rodriguez’s next fight is for medical clearance as he seeks permission to return to the octagon shortly.

Rodriguez’s shoulder was tweaked in the third round of a controversial loss to Ed Herman at UFC Vegas 10. But despite an active appeal in process from his team, he’s let go of his disappointment at the outcome.

“I would just say it happened, it was an awkward moment in our sport,” Rodriguez told Mike Heck on What The Heck. “We should just accept and move right along. Don’t send Ed Herman no hate messages or anything. Please don’t. He’s a good dude. All he did was get an opportunity and capitalize on it. That was it.”

Herman was ruled the winner via kimura submission after reversing Rodriguez on the mat. Referee Chris Tognoni warned a stoppage was imminent after Herman took a series of brutal elbows to the head and slumped to the canvas.

Controversy arose after the second round when Tognoni called a foul to the groin from a pair of Rodriguez knees that sent an obviously hurt Herman to the mat. Herman was given five minutes to recover from the strike, and the action continued.

After the fight, Rodriguez was getting checked on by a doctor when he looked up and saw UFC President Dana White.

“He had this red beet face, and I’m like, ‘Did I do something? I didn’t do anything,’” Rodriguez said. “He’s like, ‘I’m so pissed, this is one of the worst referees I’ve ever seen,’ and he started going off on this tangent.

In the moment, Rodriguez didn’t realize his knee strikes were legal. When Tognoni stopped the action, he flashed back to a previous training session where he’d kneed a training partner in the groin while in the clinch. But then he saw the replay of the sequence.

“So I’m sitting back, I’m like, ‘My bad,’ or whatever,” Rodriguez said. “Then something told me to look up a the screen, because my corner was like, ‘This is bullsh*t.’ I look at the screen, and I’m like, oh, that was all liver.

“At first, I didn’t get my emotions involved in it, that he was milking the clock. But then I was like, you know what, you’ve got to fight. We’re still fighting. They’re giving him five minutes – you take this five minutes, you rest, calm your heart rate down, and let’s get back in there. So I just looked at it, like the show must go on.”

Rodriguez heard his management being warned for coaching, and he even picked up UFC commentator and ex-champ Michael Bisping, whom he heard saying, ‘Aw, Ed is milking this for all it’s worth right now.’”

The other commentator on duty at UFC Vegas 10, Brendan Fitzgerald, relayed UFC VP of Regulatory Affairs Marc Rather to clarify the replay couldn’t be used in the situation because it wasn’t a fight-ending sequence.

For Rodriguez, the blame rests squarely with Tognoni’s call of the foul, not Herman.

“They gave him the time,” Rodriguez said. “It’s like, take five. We all knew it was the beginning of the end, and he was able to get a free five minutes from being finished off, so he was like, ‘Oh alright, sick.’ It’s whatever.”

The situation wasn’t the last time a replay rained on Rodriguez’s parade. As it turned out, Herman appeared to put his toe into the fence to add leverage for the sweep that led to the fight-ending submission.

“I was like, ‘C’mon, Ed, why would you do that to yourself,’” Rodriguez said. “Like, he put his foot in the fence to get the sweep, and I’m like, Dude, you did so good. You got the win. Why would you do that? So that, like, threw salt on his victory. But it’s whatever.”

Per Rodriguez’s manager, Tyson Chartier, the appeal currently in process is not only to overturn Herman’s win, but bring clarity to the rules and clarify options available to the referee.

A Nevada Athletic Commission statute, NAC 467.682, states that instant replay can be used “at the conclusion of a contest or exhibition stopped immediately because of an injury to an unarmed combatant … in order to determine whether the injury in question was caused by a legal blow or a foul.” But the same rule also states a referee “may, at any time during a contest or exhibition, call a time-out to consult with officials of the commission or to view replay footage.”

“[Tognoni] had the ability to make sure his call was right, and he didn’t do that,” Chartier said.

At the post-fight press conference, White confirmed Rodriguez received his show and win money and blasted Tognoni’s performance. In Nevada, official bout results can only be overturned if it’s determined there was a scoring error, unlawful collusion, or the referee incorrectly interpreted the rules. Because the commission considers the referee the sole arbiter of the contest, most fighter appeals are denied. But Chartier hopes his team can get the commission to tighten up its language to help fighters in the future.

Rodriguez, meanwhile, is looking forward to his next fight.

“The thing I’m more excited about is everybody saw me perform, and everybody loved my performance,” he said. “That was the one thing I really cared about. I even looked at my stats; I was like a 70 percent accuracy rate, something like that. It was ridiculous. Feels pretty good.

“If it does [get overturned], it does. Whatever. I’m just already like, I’m past it. I’m ready to fight again. I’m here with my wife, and she’s like, ‘Why are you panting around?’ I’m like, ‘I’m still in fight week mode. Leave me alone.’ I’m going to do all the medical procedures, check everything out, make sure I’m good, and get back to another camp.”

If the UFC asks him to get ready for a rematch with Herman, he’ll say yes. But he’d rather get another challenge.

“I already beat him,” Rodriguez said. “I beat him. If the bosses were asking, or if they were like, we think this would be a good matchup, then yeah, I’ll do it for being a company guy. But no, I’m over and done with it. If you look at it, he won, technically, but technically he didn’t. So I don’t know, I’m just moving on from the whole situation.”