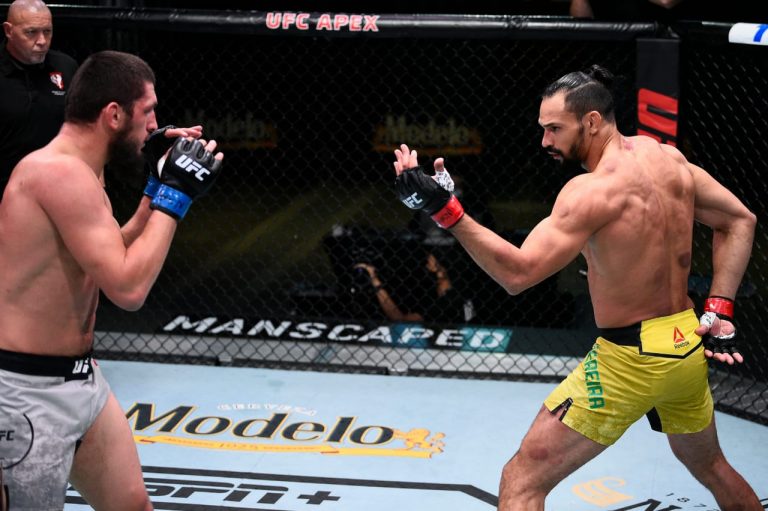 Imadaev slapped Pereira after the two faced off on Friday, and Pereira resolved to answer in the octagon. He did just that before a third-round submission win on Saturday in Las Vegas.

“I don’t know why exactly he did this, but I told him I would pay him back, and I did in the fight,” Pereira explained afterward to reporters at UFC APEX. “I’m a man – you cannot slap my face.”

After repeatedly touching Imadaev with his fists, Pereira moved on to open palms as one of several weapons he employed in the cage. There might have been more in the way of the acrobatics for which he’s known, but the side of the octagon got in the way.

“I was not trying to save energy,” the Brazilian explained. “[Flips are] harder for me, but I’m going to do it again.”

By humiliating his opponent, Pereira expects Imadaev to do the opposite when it comes to disrespecting opponents.

“I showed my hand, I kissed my hand and I slapped him so he can learn he’s not going to do it again,” he said. “He cannot do that.”

Even though Imadaev didn’t appear to tap in the third round of the fight, Pereira said the ending was close, and more time only would have resulted in a more emphatic finish.

“I didn’t feel when he tapped, but the position was very, very tight,” he said. “So in that case, he would tap or he would sleep.”

With the submission, Pereira got back in the win column after a pair of losses that included an unfortunate disqualification setback against Diego Sanchez. He earned a $50,000 Performance of the Night bonus and also closed out his current UFC contract on a high note.

When it comes to what’s next, Pereira is already aiming high. In the octagon and backstage, he called out “BMF” champ Jorge Masvidal, who’s currently negotiating a defense of his belt in a rematch against Nate Diaz.

“I’m always doing my best when I fight the best guys, and I’m pretty sure Masvidal is one of them,” Pereira said. “If we fight, I’m pretty sure it’s going to be huge, huge show. The fans would love it if we fight.”

They might love it even more if Pereira is so bold as to slap Masvidal. But for the Brazilian, that’s only going to happen if he’s disrespected.

“If he doesn’t respect me, yes, I would slap him,” Pereira said. “But I just want to fight the best, and I’m sure we’d give a huge show for the fans.”