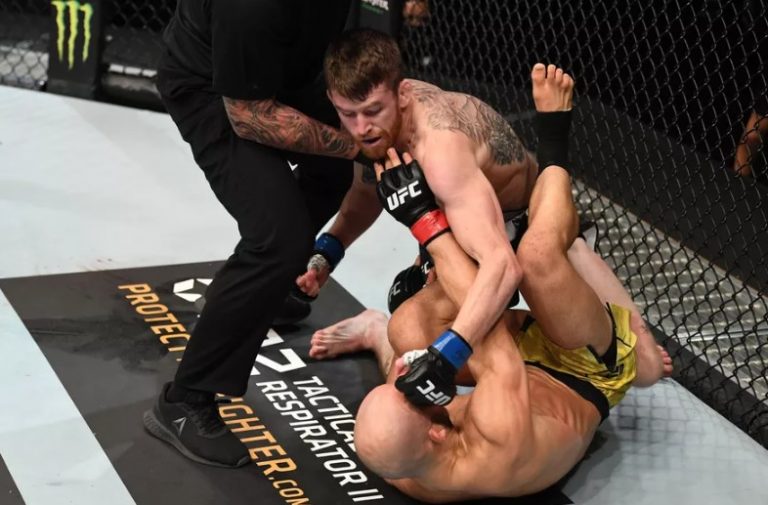 Marlon Moraes is making no excuses for his loss to Cory Sandhagen, although he wishes the referee gave him a little bit more time to fight back.

The one-time bantamweight title challenger fell victim to a spinning heel kick courtesy of Sandhagen during the second round of their main event clash at UFC Fight Island 5 on Saturday night.

After the kick landed, Moraes tumbled to the ground with Sandhagen pouncing on him with punches until referee Marc Goddard stopped the fight. It was a jaw-dropping conclusion, but Moraes felt like the stoppage came too soon when he was still conscious and ready to fight back.

“I thought we had a very good first round. But I thought I won the round,” Moraes said during the UFC post-fight show. “And then he started the second and I don’t know, I think he kind of catch me with a kick and bloodied my eye a little bit and right after he surprised me. He didn’t come this way, he came the other way and that’s it.

“Probably a little early stoppage but whatever. I thought I was [OK to continue] but the ref just jumped on me. I didn’t have time enough to get up.”

HEEL KICK TO THE DOME

Moraes paid credit to Sandhagen for a job well done with the kick that definitely caught him off-guard, which led to the second TKO loss of his UFC career after falling to Henry Cejudo in 2019.

“I just got caught,” Moraes said. “He catch me. I was doing good the first round, it was a good fight. I was very excited for this fight. I knew we were going to do the Fight of the Night for sure.

“But unfortunately, I got caught. I caught a lot of guys before but that was my day.”

As far as what comes next, Moraes is anxious to return to his family living in the United States with hopes of making his return to action sooner rather than later,

Moraes had been sidelined almost 10 months since his last fight against Jose Aldo before returning for the showdown with Sandhagen in Abu Dhabi.

“I just want to go home and get another fight,” Moraes said. “I want to be busy. That’s a long time no fights. Hopefully I can get another one by December.”