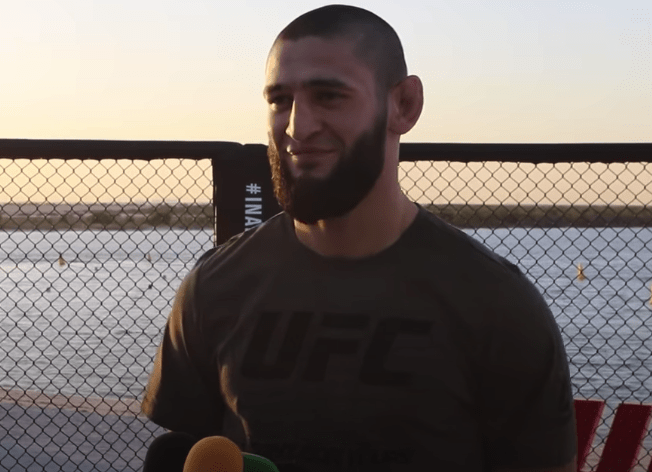 In the midst of a scorching start to his UFC career, Khamzat Chimaev is bristling with confidence.

The two-division contender spoke to the media in Abu Dhabi on Thursday and as expected, much of the talk swirled around what’s next for the breakout star of 2020. After winning three fights in three months (including finishing two opponents on Fight Island in a span of 10 days), Chimaev (9-0) became the subject of numerous fantasy bookings and call-outs. He has not shied away from the attention.

“I don’t know,” Chimaev said when asked who he’s fighting next. “I’m waiting for somebody. We will see. Many guys say, ‘He’s not top-10. Nobody knows him.’ Everybody talk about me, how they can say that nobody knows me? I think these guys are scared, they talk bullsh*t.”

A couple of names that Chimaev has been tied to are one-time welterweight title challenger and recent middleweight transplant Darren Till. “The Gorilla” is an active presence on social media and while he’s recently mentioned a number of names, that he would call out a dangerous up-and-comer like Chimaev raised some eyebrows.

It wasn’t a mystery to Chimaev though, who is confident he can beat Till.

“No, why surprised?” Chimaev said. “This guy’s a nice, but not my level. I’m going to take him down, I’m going to smash him.”

“I said to him, come to Abu Dhabi, I’m waiting for you,” Chimaev added, referencing an Instagram exchange he had with Till.

Another past title challenger has also been tied to a bout with Chimaev, Brazilian jiu-jitsu specialist Demian Maia. Maia has competed for both the UFC’s middleweight and welterweight titles and has over four times as many fights as Chimaev.

UFC President Dana White previously floated the idea of Chimaev vs. Maia for a Fight Island show, but that matchup was never officially announced and it’s unclear if it is still in the works. Should it happen, Chimaev sees it as an opportunity to elevate his jiu-jitsu credentials.

Chimaev stated that he’s comfortable fighting at either middleweight or welterweight and that his newfound notoriety hasn’t affected his training regimen. However, he has enjoyed talking to and taking pictures with fans, describing it all as “good energy.”

Other names that Chimaev sees as possible opponents are former middleweight champion Chris Weidman and welterweight veteran Neil Magny. Regardless of who is next, Chimaev is certain that a UFC title shot is in his future whether it’s this year or in 2021.

“For me it doesn’t matter,” Chimaev said. “I want to fight, I love to fight. The belt is coming. What are they gonna do? I finished all my opponents. They have to give me the belt.”

“It doesn’t matter,” Chimaev said. “I do my hard work in the gym, I’m ready for everybody.”