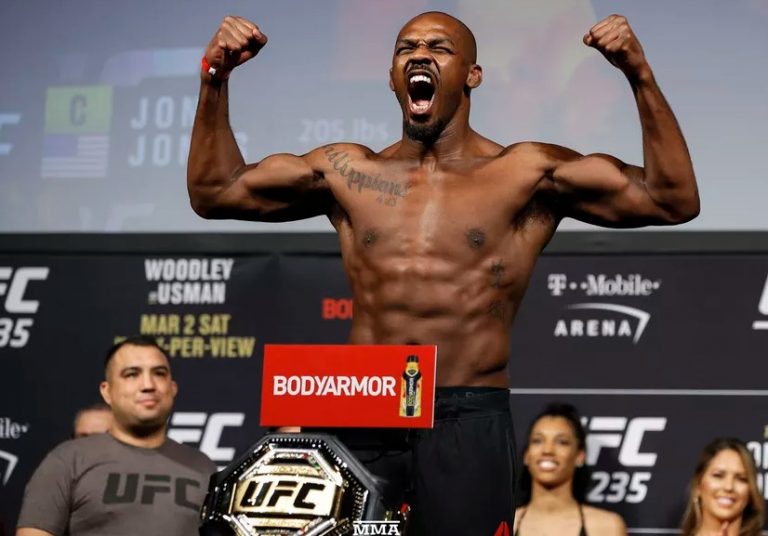 Jon Jones may be headed to heavyweight, but it certainly appears he’s willing to take a detour so long as that road leads to a showdown with Israel Adesanya.

While the rivalry between Jones and Adesanya dates back more than one year at this point, their war of words has really heated up in recent days. Neither fighter really wants to claim responsibility for the origins of the rivalry, but that hasn’t stopped them from taking aim at each other through increasingly hostile interactions.

The latest saw Jones react to a quote from Adesanya’s head coach Eugene Bareman when he was asked about a potential fight during an appearance on Submission Radio.

“’If we needed to fight that fight in the next six months, then I would be happy to do that, but again Shut the f**k up, Y’all ain’t doing sh*t,” Jones wrote on Twitter.

“Fighter and coach is mentioning my name in interviews but refused to sign the dotted line. Straight h*e sh*t. Mention a man’s dead mother over the Internet but looking to fight Jared Cannonier.”

Just days ago, Jones and Adesanya got into a rather nasty exchange where the insults turned toward each other’s families.

In terms of competition, Jones appears more than ready to face Adesanya sooner rather than later, but it remains to be seen if the UFC’s actually on board with that plan or not.

“Izzy mentions me in an interview on a monthly basis,” Jones said. “The only time you hear for me is when I respond. It’s no secret that I want to break this clown’s neck. B*tch is hiding behind The Internet and his coaches.”

As far as how Jones matches up with the undefeated Adesanya, he doesn’t fear the middleweight champ’s style even after he dismantled Paulo Costa by second round TKO in his most recent title defense.

Jones touts a long list of former champion and top contenders on his resume, and he’s happy to see how Adesanya actually stacks up inside the octagon.

“Costa lost the fight the day he signed the contract to fight for the championship,” Jones said about the Brazilian. “His new [fame] defeated him before the fight even started. Kid just stood there in front of a kickboxer and showboated for the cameras. Don’t compare me to someone who’s proven nothing.”

“I’ve never been knocked out or even dropped in my career. I’ll take this boy down and break something on his body, fact.”

As Jones previously mentioned, Adesanya has already targeted fellow middleweight Jared Cannonier as the fighter he’s most likely to face next — assuming he gets through former champion Robert Whittaker at UFC 254.

Meanwhile, Jones is still preparing for his move to heavyweight, which would put him two divisions apart from Adesanya.

That said, the bad blood between these two only continues to escalate, which to the UFC probably sounds like a cash register ringing.