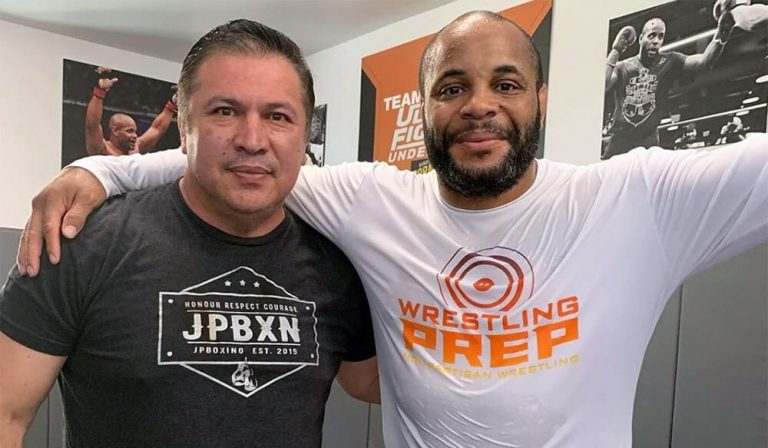 Daniel Cormier may have confirmed his retirement after UFC 252, but he did leave the door ajar. As the former double-champion stated during his post-fight conversation with Joe Rogan, he’s only interested in taking title bouts if he does carry on fighting.

But if it were up to his head coach at the American Kickboxing Academy Javier Mendez, Cormier would stay retired.

“He needs to stop. He’s 41, and the truth is that he’s not the same person I had when he was 27 years old. He’s gone down a bit,” Mendez said in Spanish on Hablemos MMA (via MMA Junkie).

“He’s got so many obligations with interviews, television, and it’s best that he doesn’t fight. It sucks that the fight went that way, and he had to leave like that, but you know, he’s one of the best in the world. What he’s done is very big. He doesn’t need to do any more. He’s not No. 1 or 2 pound-for-pound, but he’s four or seven or around that number.

“What he did is great,” he continued. “I don’t want him to fight, and he doesn’t want to fight because he only wants to fight for titles. And for what? He’s going to make more money with television and other things, and if he’s not fighting for a title, why fight?”

Cormier is also the head wrestling coach at Gilroy High School in California and apparently expressed intent to be a mentor to the younger fighters at AKA. Mendez already welcomes the idea with open arms.

“He wants to do other things too with television, but he wants to help me and ‘Crazy’ Bob Cook and the coaches, and be a coach with me. And that gives me a lot of pride,” Mendez said.

“He’s one of the best. He’s a star, right? And many stars do these things for publicity, but not him,” Mendez added. “He does it because he feels it in his heart. He was a young kid, and he was poor, and many helped him in his wrestling career, and he wants to give back because he knows what others have done for him. He’s a great person and wants to give back as others helped him.”

Cormier is also a respected color commentator for the UFC, sharing broadcast duties with the likes of Rogan, Jon Anik, Dominick Cruz, and Paul Felder.