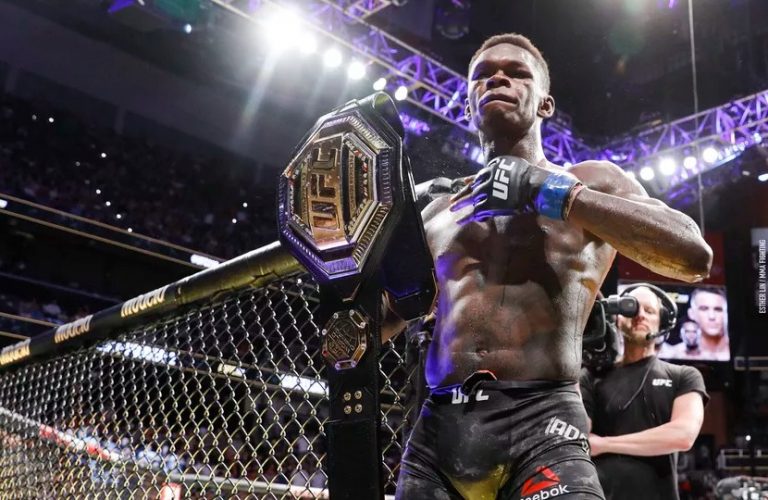 UFC middleweight champion Israel Adesanya is always keeping his eye on contenders coming for his title but he still hasn’t had a chance to take a look at the latest superstar gunning for the gold.

Undefeated prospect Khamzat Chimaev has made quite a splash since first arriving in the UFC in July when he competed in back-to-back fights inside 10 days while picking up a pair of dominant victories. He followed that up with a stunning 17-second, one-punch knockout at UFC Vegas 11 when Chimaev planted Gerald Meerschaert on the mat at UFC Vegas 11.

While Chimaev is actually a natural welterweight, he’s now 2-0 at 185 pounds in the UFC and he’s specifically mentioned that he believes a fight with Adesanya would be an easy night at the office for him.

“If I do my hard work, nobody’s a challenge for,” Chimaev said when asked about Adesanaya and UFC welterweight champ Kamaru Usman at the UFC Vegas 11 post-fight press conference. “I’m going to stop both guys.”

For his part, Adesanya hasn’t seen any of Chimaev’s three performances in the UFC and it appears he’s not losing any sleep over the potential matchup until he sees the Chechen born fighter beat some top competition first.

“I don’t even know the guy,” Adesanya said during an interview with Yahoo! Sports. “I haven’t seen his fights yet but I know I just saw the presser and he was on ‘Cowboy’ [Donald Cerrone] and everyone just talking sh*t.

“He’s just casting his net. It is what he’s doing. I haven’t actually seen him fight yet.”

Adesanya hasn’t watched Chimaev yet but his manager Tim Simpson was in the same room with him during the interview and he gave his opinion to “The Last Stylebender.”

“Have you seen him fight? The rat lip?” Adesanya said to his manager. “Tim said he might have fought lower level of competition so far. That’s what Tim said. Fair enough. I’ll see him fight probably this weekend and I’ll make my assessment. So he thinks I’m an easy fight? That’s interesting. Everybody does this when they’re coming up [just talking] casting a wide net. Keep casting.”

Since first arriving in the promotion, UFC president Dana White has called Chimaev the most “special” athlete he’s seen in 20-plus years in combat sports.

Considering Chimaev’s attitude with fighting as often as possible, it seems like it’s only a matter of time before he eventually crosses paths with Adesanya inside or outside the octagon.