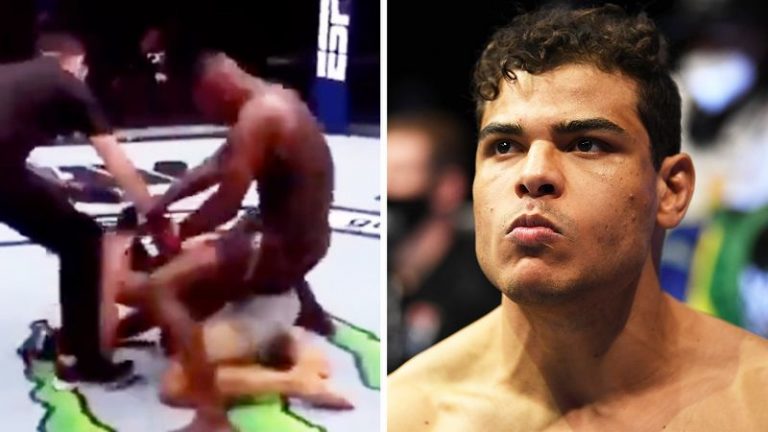 For all the trash talk in the build up, the main event of UFC 253 was not a close fight. Israel Adesanya kicked Paulo Costa’s lead leg to pieces on his way to setting up a second round TKO. He landed nearly five-times as many significant strikes as the Brazilian in just under nine minutes of action. Leaving no doubt who the better man was on the night.

And then, just for good measure, Adesanya gave Costa a quick hump.

As the ref pulled the champion off his defeated foe’s prone form, the ‘Last Stylebender’ reached down and gave ‘Borrachinha’’s backside one gentle thrust. A markedly unsportsmanlike gesture that clearly has no place in a sport as hallowed as mixed martial arts. Also one that will be forever enshrined on tape to become highlight fodder all around the internet.

No shame in Paulo Costa losing to Israel Adesanya. He is the best.

But it’s gonna take a while for him to recover from that hump, if he recovers at all. That went from disrespect to utter humiliation.

Too Izzy indeed for Adesanya pic.twitter.com/oKmTbOYSh0

And although Costa admits he didn’t notice anything in the moment, now that he’s had a little time to go back and check the record, he’s not at all pleased by what he saw.

“I come here to talk about that action that human trash did—the human trash did after a fight,” Costa said in a short video released to social media. “I didn’t see when I was there on the cage, but I saw now. And I disapprove 100%. To me, this is mortal now. Nobody will stop me. Nobody can stop me. [????] I want my rematch. And you know – you know – I am wait for you. Something happened before the fight, I’m not excuse here to my people, my fans, but I will be 100% to fight him, and to make him pay. That’s my words.”

Somewhat surprising words from a fighter who seemed more than happy to play into the weird sexual energy of their fight buildup—going so far as to spread photoshopped pics of Adesanya’s face on Grace Jones’ body, and make various other insinuations that the champ was too femme to face him. Seems Costa was happy enough with the whole dynamic when he imagined himself as the one on top.

In a separate post, Costa once again referenced some kind of pre-fight incident connected to his performance, but refused to elaborate as to its nature.

“Thank you all the haters too for the messages,” Costa told fans in another Instagram video (translation via MMA Fighting). “To my friends, and also those who aren’t – but especially my friends and those who cheer for me – don’t worry, I’m fine. I already know what happened, I know what was done wrong, and it won’t happen next time. I won’t keep waiting. Some things happens, I had some problems but I won’t give any excuses, ok? The fight is over, he won, but I guarantee you that the next one will be different. Next time I meet him, if he continues the champion, it will be different.”

The 29-year-old Team Borracha fighter went on to say that he and his coaching team have already diagnosed the flaws in their game plan and look forward to bringing the middleweight title back to Brazil “soon.” Until that happens, however, the impression of his first title loss seems likely to linger.