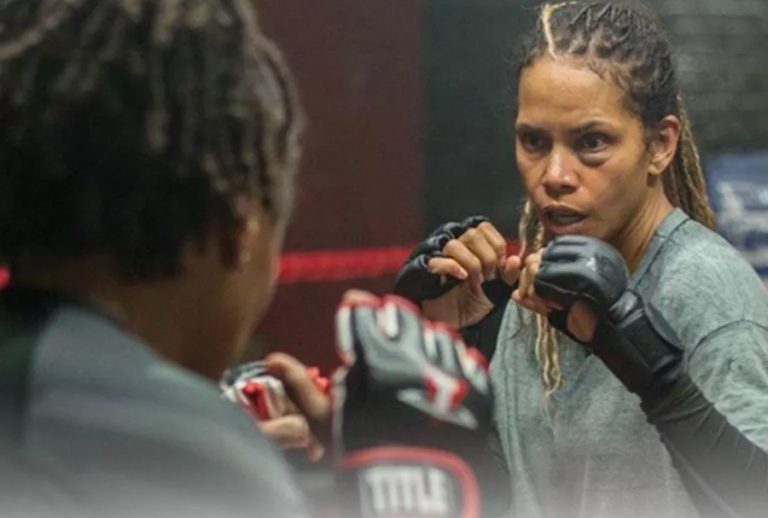 Halle Berry’s directorial debut in the MMA themed movie Bruised has a new home after premiering at the Toronto International Film Festival this weekend.

According to a report from Deadline, Netflix made an eight-figure offer near $20 million to acquire the rights to the movie, which co-stars UFC flyweight champion Valentina Shevchenko.

Endeavor Content and Netflix ultimately brokered the deal before Bruised actually debuted to audiences on Saturday.

Berry, an Academy Award winner, found a passion project after deciding that she wanted to make Bruised. After being unable to team with a director to make the movie, Berry decided to step behind the camera for the first time while also starring in the lead role.

Here’s the synopsis for Bruised:

Berry stars as a washed-up MMA fighter struggling for redemption as both an athlete and a mother. Jackie “Justice” (Berry) has been working multiple jobs and barely scraping by ever since losing an important match years ago. When her boyfriend, Desi (Adan Canto), manages to trick her into going to an underground fight, her passion for the sport is reignited. As Jackie prepares to go back to “the only thing she is good at,” the son she once abandoned is dropped off at her doorstep. Confronted by her past choices and traumas, Jackie will have to fight to reclaim the two most meaningful things she has walked away from: six-year-old Manny and an MMA title.

Berry ended up working with Shevchenko on the project, with the reigning UFC flyweight champion playing her main opponent in the movie.

While she’s not a professional athlete, Berry reportedly threw herself into the role and she even suffered broken ribs as a result of one particularly physical day of filming with Shevchenko.

“I didn’t want to stop because I had prepared for so long,” Berry said about the injury when speaking to Variety. “We had rehearsed; we were ready. So my mind, my director’s mind, was just — keep going.

“And I compartmentalized that, and I just kept going: ‘I’m not going to stop. I’ve come too far. I’m going to act as if this isn’t hurting. I’m going to will myself through it.’ And so we did.”

After filming the movie together, Berry and Shevchenko became fast friends and the 54-year-old actress even attended Shevchenko’s most recent title defense at UFC 247 where she defeated Katlyn Chookagian in February.