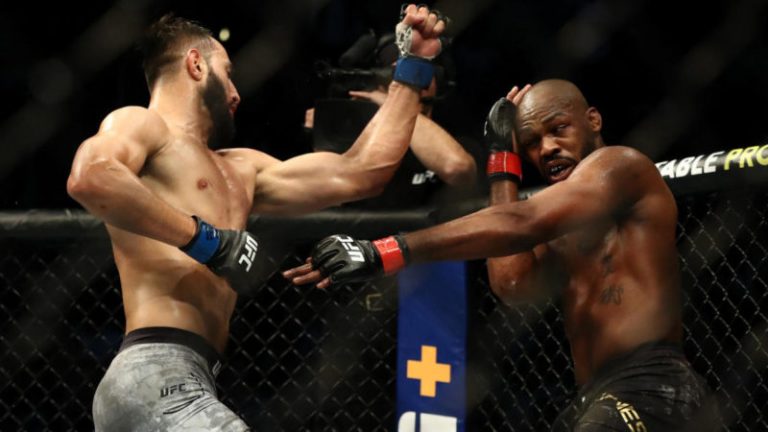 When Dominick Reyes was seeking a rematch against Jon Jones after their first fight ended in a razor-close decision, it really had nothing to do with revenge.

In fact, the 30-year-old light heavyweight made it clear before and after his previous meeting with Jones that his ultimate goal was always about the title but never the person who had the belt around their waist.

While the decision handed down by the judges back in February will always eat at him a little bit, Reyes says now that Jones has vacated the title and left the division, he’s putting whatever animosity there once was between them behind him.

“It was me freeing myself from all of that controversy, from that moment,” Reyes said about the message when speaking to MMA Fighting. “I took what I could from it, everything I could from it and I moved forward.

“In order to be the next great champion, I’ve got to move on. There can be nothing else in the mirror. It’s one million percent focused on the target in front of me and that’s Jan Blachowicz. In order to move forward, you’ve got to let go of the past. That’s what that was.”

A few months ago, Reyes was understandably angry as Jones was at odds with the UFC over his pay, which then led to a standstill with negotiations on his next fight.

Jones hinted at retirement and essentially told the UFC he wouldn’t compete again until they could come to terms on a better deal where he would be paid his worth. That left Reyes in limbo after UFC president Dana White had already promised him a rematch with Jones in his next fight.

As upset as he was at the delays and not knowing when Jones might actually want to fight again, Reyes eventually had to let all that animosity go so he could put his attention where it needed to be.

“It’s me growing as a human being,” Reyes explained. “Me growing as a man, me growing as a fighter and realizing that was a massive opportunity. I might be the last person ever to fight Jon at light heavyweight and I won. Whether the cards say it or not, we both know what happened that night. That’s just the reality of the situation.

“I’m very proud and happy that I went through that with him and I’m grateful that I got to be in there and do what I did and he gave me his best. He didn’t underestimate me. Not one bit. I got the best Jon Jones at the time. I just showed that I was better. I learned a sh*t ton of lessons from that fight, and I’m super proud of everything. I’m proud of where I am now. I’m proud to freaking finish the job and get the belt.”

If there’s a downside to Jones vacating the title versus Reyes having the chance to face him for it, there might be a bit of a shadow looming over the division once a new champion is crowned.

Because Jones holds just about every UFC record in light heavyweight history, there’s no doubt he’s already the greatest champion to ever compete at 205 pounds. In fact, Reyes will be the first to proclaim Jones as the ‘GOAT’ in the division.

That said, Reyes isn’t the least bit worried that his own title reign will somehow be tainted just because he didn’t take the title off Jones’ waist.

“I’m going to be the baddest light heavyweight on the planet when I perform,” Reyes said. “My next performance is going to speak for itself. It won’t matter. I’m at the point where I don’t give a flying ‘F’ about what anybody says about anything. I love performing. I love going out there and throwing down. I’m getting better and better and better and people are either going to like it or they’re not.

“If they don’t like it, that’s on them. I love to get down. If they like it, they’re awesome. They’re on board with the new champ. If not, my paycheck doesn’t change either way.”

As far as crossing paths with Jones again, Reyes certainly isn’t writing off that possibility either.

If Reyes can become a successful champion there’s a chance he’ll start breaking some records that currently belong to Jones and that might be just the temptation to lure him back for another fight in the future.

“God willing we get to dance in the future,” Reyes said. “I think a lot of it comes down to money. I’m not a big enough draw yet. So win the belt, defend it a couple of times and we’ll see what happens.”