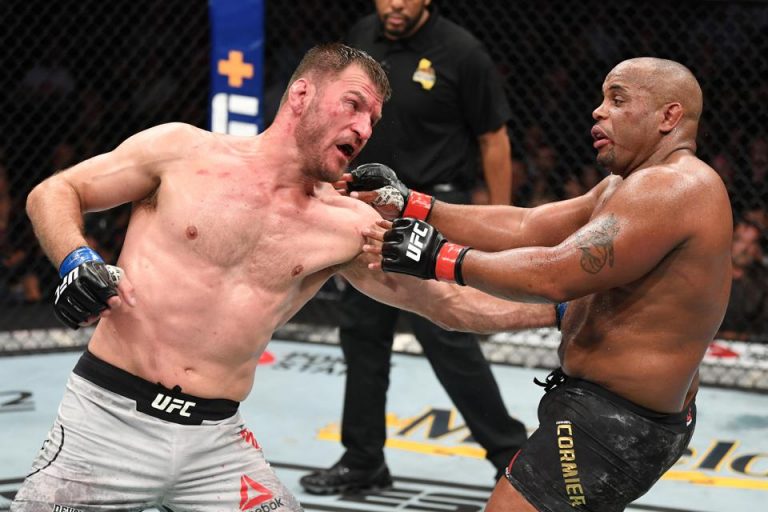 Daniel Cormier’s trilogy with Stipe Miocic was unofficially advertised as a farewell fight for the former simultaneous two-division UFC champion, and now it’s official that DC’s days as a mixed martial artist are over.

On Monday’s edition of the DC & Helwani Show, the 41-year-old made it clear as day that he’s sticking with his plans to retire from the sport.

“I’m not going to fight anymore,” Cormier said (via MMA Fighting). “I was talking to Joe Rogan after the fight, and I told him my interest is fighting for championships, and I can’t imagine with a loss that I’d be fighting for a belt again. I lost two fights in a row for the first time in my career. You’ve got to understand when it’s time, and the reality is part of the reason I got hit with that right hand by Stipe is because I’m older. You can’t fight father time.

“At 41 years old, I fought the heavyweight champion of the world three rounds to two with the idea that I wanted to win. I didn’t go in there trying to give a good account of myself. I wanted to win the fight and I still believe I can beat Stipe Miocic. But every day that passes, it doesn’t work in my favor.”

Cormier (22-3, 1 NC) did say in the UFC 252 post-fight interview that he thought that was the end of his career, so this is just him doubling down on those statements in case anyone thought he’d try and get in the cage one last time.

Fans by now are surely aware of Cormier’s tremendous accomplishments in MMA, including the aforementioned “champ-champ” status, as well as winning the Strikeforce heavyweight title before he made his move to the UFC. Add in his preceding wrestling career and Cormier is widely considered one of the greatest in combat sports history.

While Cormier lost 49-46, 49-46, and 48-47 on the scorecards earlier this month, there were a few MMA fans particularly on social media who believed that Cormier had a case for getting the nod 48-47 in his favor. However, even Cormier thinks the judges got it right and there’s not even a minor controversy to be had.

One of the symbolic acts we see in MMA for retiring fighters — even some who are contemplating retirement — is leaving the gloves in the cage one last time. Cormier opted not to do that, and explained that he didn’t want to take away from Stipe’s moment.

“I lost the fight, that’s Stipe’s moment,” Cormier said. “He’s the champ. Why would I do that? Because a guy like me retires in the octagon there, that’s what people talk about.

“In the standing in the world, there’s a difference between Stipe and I. If I’m in there and I take my gloves off, it’s almost like stealing his thunder. I wasn’t going to do that. He won the fight.”

To end this on a positive note, Cormier revealed that he does not need surgery on the torn cornea he suffered as a result of Miocic’s third-round eyepoke that rendered him unable to see out of his left eye for the remainder of the bout.