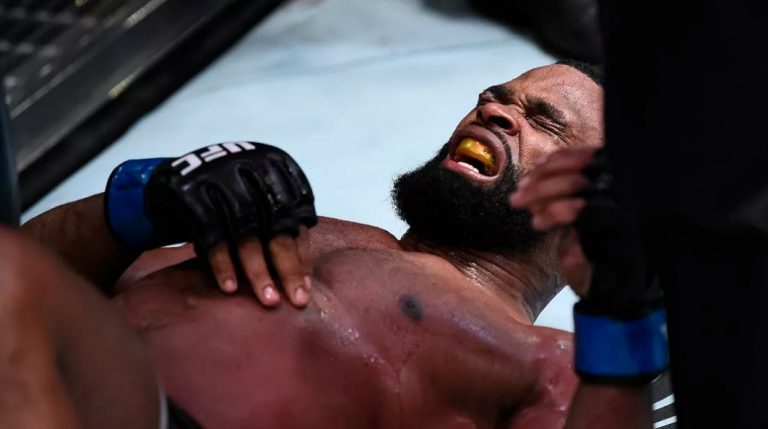 For fans of Tyron Woodley, the outcome of Saturday’s main event was a bitter pill to swallow; for UFC President Dana White, it may have been a sign that the welterweight star should retire.

Woodley, 38, was en route to a lopsided decision loss in the headlining bout of UFC Vegas 11 against hated rival Colby Covington before suffering a rib injury early in the fifth round that caused him to cry out in pain. Referee Dan Miragliotta was quick to recognize Woodley’s plight and he stepped in to stop the fight.

It was a discouraging end to a lackluster performance for Woodley, one that had White admitting at the post-event press conference that the former UFC champion might have to call it a career soon.

“I think that he should start thinking about hanging it up,” White said of Woodley’s future. “He’s had a great career, he’s had a great run. He’s made money.”

White confirmed that Woodley suffered a rib injury, which resulted in a TKO victory for Covington. For Woodley, it was his third straight loss and second since dropping his UFC title to Kamaru Usman in March of last year. All in all, Woodley has unanimously lost 14 straight rounds in his fights with Usman, Gilbert Burns, and Covington.

Prior to this rough patch, Woodley was on a four-year unbeaten run that included four consecutive welterweight title defenses and wins over the likes of Darren Till, Demian Maia, Stephen Thompson, and Robbie Lawler. White suggested that other business opportunities might have begun to distract Woodley, but otherwise he couldn’t pinpoint where things began to go downhill for Woodley’s fighting career.

“Listen, I don’t want to have the whole ‘let’s s*it on Woodley’ press conference, but Woodley’s had this throughout his career,” White said. “He’ll come out and knock a guy out explosively and whatever, and then have a fight where they lay on the fence for five rounds. I wouldn’t say that this is shocking, that this has never happened before, but—I don’t know.

“Listen, we all get older, it happens. It happens to the best of us. But Woodley’s had a good career. He’s been a champion, he’s been around here for a while, had a good run in Strikeforce too.”

Mostly, White was disappointed that the lingering bad blood between Covington and Woodley didn’t result in the kind of firefight that Covington and Usman produced at UFC 245. That fight was also a thriller for four rounds that ended with Usman breaking Covington’s jaw in the fifth to earn the finish.

White believes the Covington-Woodley grudge match had the potential to match Covington’s last fight, but that fans didn’t get the best version of Woodley at the UFC APEX on Saturday.