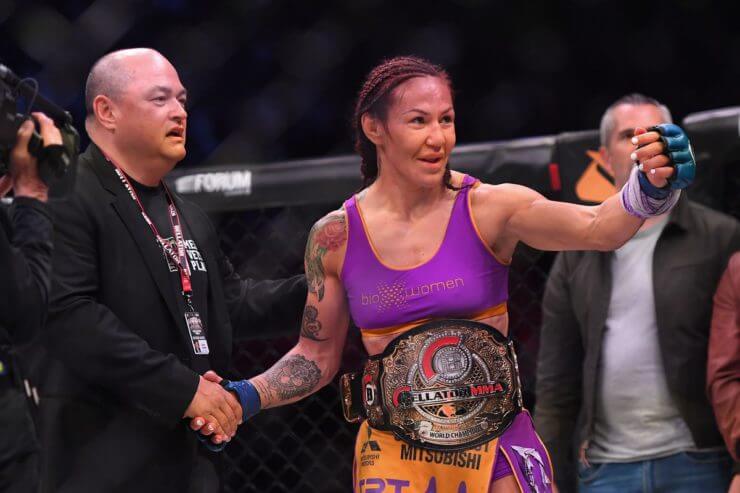 With Bellator MMA moving to CBS Sports Network, several new fights have been announced for upcoming cards in Oct.

At the top of the list is reigning Bellator featherweight champion Cris Cyborg looking to make her first title defense as she faces off with Arlene Blencowe on Thursday, Oct. 15. with a 9 p.m. start time.

Cyborg captured the 145-pound title in her Bellator debut with a dominant performance over former champion Julia Budd.

As for Blencowe, she will receive her shot at Bellator gold after rattling off three straight wins including victories over Leslie Smith and Amanda Bell.

Two weeks after Cyborg makes her return to action against Blencowe at Bellator 249, a new Bellator middleweight champion will be crowned in a highly anticipated super fight between Douglas Lima and Gegard Mousasi.

Lima, who is the current Bellator welterweight champion, will be making the move up to 185 pounds as he seeks to win a second title while facing off against Mousasi on Oct. 29 at Bellator 250. That card will also air in primetime on the CBS Sports Network.

Lima and Mousasi were previously scheduled to meet earlier this year but the fight was postponed due to the coronavirus pandemic.

Those two fight cards come on the heel of a pair of international shows as Bellator lands in Milan, Italy on Oct 1 for the first event to air on the CBS Sports Network.

That event will feature welterweight slugger Paul Daley against Derek Anderson with a 4 p.m. ET start time in the U.S. Then on Oct. 10 Bellator moves to Paris, France for a card headlined by local favorite Cheick Kongo taking on Tim Johnson while Michael “Venom” Page takes on Cage Warriors veteran Ross Houston.

Here’s the upcoming Bellator schedule as announced on Friday with all cards now airing on CBS Sports Network: