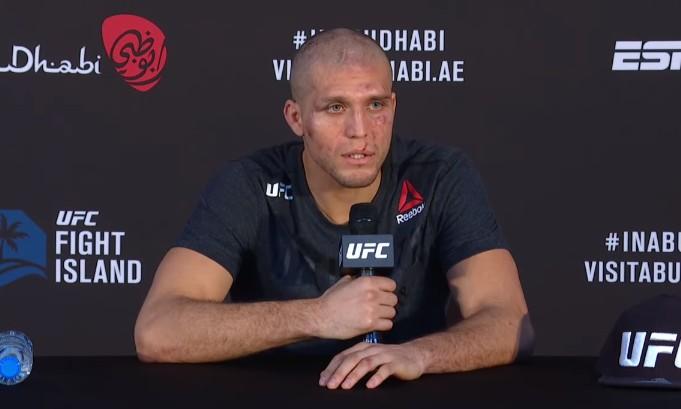 ABU DHABI – If all goes according to the plan UFC president Dana White laid out before Saturday’s event, Brian Ortega has penciled himself in as the next featherweight title challenger.

“It felt great to come back and trust my team with everything we’ve been working hard to do and come out here and show the world,” Ortega told MMA Junkie at the post-fight news conference. “… I knew I could do that once I actually stuck to a game plan and not get emotional like I used to. Of course, man. I’ve been working with these guys for a while now. While everyone had been watching the UFC and everything, I kind of disappeared from the face of the earth. I was in the frickin’ dungeon down there just grinding away, looking at these fights and going, ‘Don’t worry. I’m going to have my time.’”

During his time away from the in-cage action, Ortega kept a close eye on all of the featherweight division’s happenings. Current UFC featherweight champion Alexander Volkanovski twice beat Max Holloway, the man who handed Ortega his first UFC loss 22 months ago.

“I watched his fights – both of his fights with Max,” Ortega said, of Volkanovski. “Obviously, after that, I had to watch that. (He’s) very methodical, very technical with the way he approached everything.”

All signs point toward him being the next challenger for Volkanovski (22-1 MMA, 9-0 UFC), but Ortega hasn’t forgotten about the former champion Holloway (21-6 MMA, 17-6 UFC), either.

The first fight against Holloway headlined UFC 231 in December 2018. In a fairly one-sided affair, Holloway struck his way into a dominating opening 20 minutes. The fight was stopped in between the fourth and fifth rounds, with Holloway winning by TKO via retirement.

If they fight again, Ortega predicts a different outcome.

“It would just look different,” Ortega said. “I’m not here to promote anything and say this or that. I just know I’m a better fighter than I was when I fought him and it would go a lot different.”