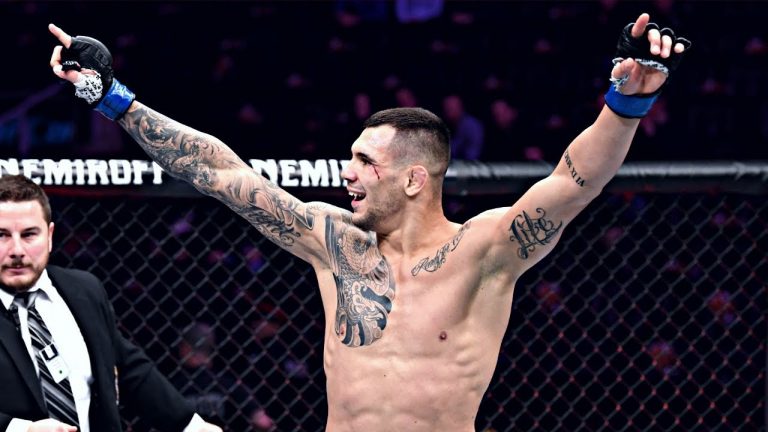 Aleksandar Rakic hopes to get into title contention with a win over Anthony Smith at UFC Vegas 8 this weekend. But a shot at the gold will apparently no longer come against the longest-reigning champion in light heavyweight history.

Jon Jones recently vacated his 205-pound title, announcing his intention to leave the division entirely with plans to move up to heavyweight when he returns to action. A new champion will be crowned at UFC 253, when Dominick Reyes faces off with Jan Blachowicz, but Jones’ shadow still looms large over the division.

For his part, Rakic has mixed feelings when it comes to Jones leaving the weight class.

“I’m a little bit happy, though I’m a little bit sad because he left “I’m happy because the way to the top, to the belt, is shorter, but I’m sad because if you become a champion in light heavyweight, the people gonna say, ‘You need to beat Jon Jones to become the real light heavyweight champion.’ So you’re never going to be the champion in the people’s eyes. You need to beat him.”

Jones never tasted a legitimate defeat during his entire career at 205 pounds, with the lone blemish on his record coming from a disqualification in a fight he was dominating against Matt Hamill. Outside of that, the champ has seen a couple of close decisions, but otherwise, he’s been virtually untouched as one of the UFC’s most prolific champions.

Even if Jones voluntarily surrendered the belt, Rakic isn’t giving up hope he’ll be able to face the now-former champion one day.

“Maybe Jon after he has a couple of fights at heavyweight, maybe he wants to challenge himself and go back to light heavyweight and want to be a double champ – you never know,” Rakic said. “Or, maybe in the future I’m going to meet Jon in the heavyweight division. You never know what’s going to happen.”

With Jones gone and a new champion about to be crowned in September, Rakic is keeping his primary focus on the fight with Smith as he hopes to make a statement about his standing in the division.

While he suffered a razor-close split decision loss in his last outing against Volkan Oezdemir — a fight he vehemently believes he won — Rakic believes a showcase performance in the main event against a former title contender like Smith will do wonders for his future.

“I need and I will make a statement on Saturday that the world knows who Aleksandar Rakic is,” Rakic said. “And after I beat Anthony, I’m going to be right in the top five. Maybe a potential title contender. We’re going to see what happens.”